With cutbacks imminent, Arizona and other states scramble to save Colorado River water 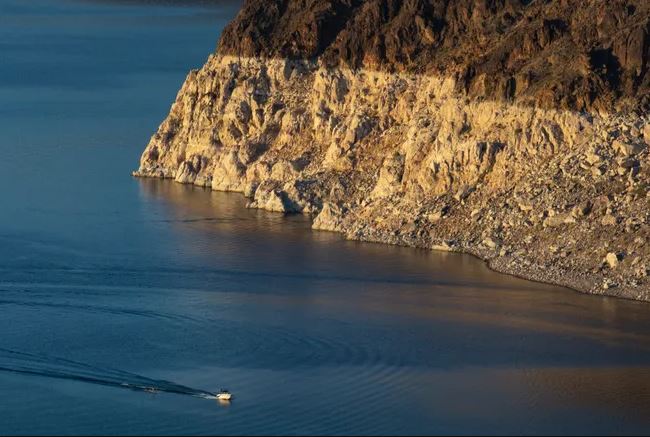 The Colorado River’s worsening water supply outlook has led Arizona, California and Nevada to commit at least $100 million over the next two years to reduce consumption dramatically and keep more water in Lake Mead.

It’s not as though no one saw a crisis coming before now, with a warming climate and decades-long drought continuing to exacerbate the region’s overuse problem. But when the U.S. Bureau of Reclamation formally declared a shortage in August that will necessitate cuts to certain Arizona farmers and others beginning this winter, three states with a long history of bickering over the river teamed up.

The plan fell into place rapidly and calls for the states to collectively hold back 500,000 acre-feet of water in Lake Mead every year for five years — almost matching the amount that Arizona already must forfeit to the shortage declaration. Funding has been identified to compensate water users who agree to cut back in the first two years.

The federal government, Mexico, various tribes and all seven states that use the Colorado will continue to negotiate new guidelines for operating the river’s dams, aiming to complete a plan by 2026, but the states believe they must act now to stop the shrinking reservoir levels from triggering further cuts under the existing rules.

“We need to plan on a more conservative basis,” Arizona Department of Water Resources Director Tom Buschatzke said. “The projections are all heading in a direction where we should assume declining levels of Lake Mead are our future without additional actions.”

When Buschatzke saw the worsening conditions after poor meltwater runoff from the Rocky Mountains last spring, he asked for and got $10 million from the governor’s budget for drought mitigation.

Once Reclamation officials in August projected the reservoir would start next year below elevation 1,075 feet, the trigger for a restrictive shortage declaration, he asked for and got another $30 million. That money came from the pot of federal pandemic recovery funds in the American Rescue Plan Act and will pay for farm efficiency upgrades or temporary field fallowing from willing farmers.

In all, the states are committing $100 million to such efforts over the next two years. They are likely to apply for more money from the federal government, Buschatzke said. The infrastructure package that President Biden signed this week includes $300 million for drought mitigation on the Colorado River, with $250 million of it for the river’s lower basin, which includes Arizona, California and Nevada.

On Thursday, the Southern Nevada Water Authority’s board approved $20 million toward the effort. Nevada’s share of river water is by far the smallest of the three lower-basin states, but metropolitan Las Vegas relies on it heavily. The $20 million represents up to 20% of what the three states will spend on the effort over two years.

Infrastructure in Arizona:Cities not sure what they’ll get from $1.2T infrastructure bill, but it’s not stopping leaders from making wishlists.

Lake Mead’s surface elevation started this calendar year about 9 feet lower than last year, and is projected to drop by more than that by January, triggering a shortage when it dips below 1,075 feet above sea level. Bigger water restrictions will come in any year that the Bureau of Reclamation expects the lake to start out below elevation 1,050, and again at 1,025, and each dry winter is likely to accelerate the plunge because the water is dropping into narrower canyon cuts near the dam.

The urgency to act is unprecedented, with water managers looking back on two decades of drought and forward to a La Niña weather pattern that often portends a dry winter in the Southwest. The region already is in a weak La Niña, the meteorological name for when cold equatorial ocean waters affect the Southwest’s weather.

“Any La Niña is a dry forecast for Arizona,” National Weather Service forecaster and climate specialist Mark O’Malley told Buschatzke and other members of the state’s Drought Monitoring Technical Committee this month.

The forecast for the Colorado River is less clear, though, as O’Malley said only about half of La Niñas in recent decades have produced dry winters in the Rockies, where most of the river’s water originates as snow. Much will also depend on fall and early-winter precipitation that can moisten parched soils that would otherwise soak up more of next spring’s snowmelt.

That happened last spring, as near-normal snowfall vanished into dry soils and into the air that has become warmer with climate change.

“It doesn’t take a scientist to tell you (that) if you have warmer temperatures, you’re going to evaporate more,” O’Malley said.

After that meeting, the committee recommended that Gov. Doug Ducey renew the state’s long-running drought declaration.

Arizona already has worked out its share of the first two years of extra, voluntary water reductions, Buschatzke said, and will rely on tribes, cities and farmers either storing more of their water in Lake Mead for now or taking payment to fallow fields or otherwise forego water deliveries. These reductions are temporary, voluntary and, in many cases, compensated. The department has yet to announce how much of the water savings will be Arizona’s responsibility.

The Central Arizona Water Conservation District, which manages the Central Arizona Project Canal and accounts for all of the water that Arizona will lose during a shortage declaration, has worked with DWR on the deal and is another potential funder. Other major partners are the Southern Nevada Water Authority and the Metropolitan Water District of Southern California.

Buschatzke could not immediately confirm which other Arizona entities are included in the deal, because he wanted to wait for various governing boards to formally sign-on. But one player with a significant role will be the Gila Indian River Community.

The community south of Phoenix holds a substantial right to Colorado River water in lieu of Gila River water that once flowed to its lands. The tribal community already has helped prop up Lake Mead by several feet under the state’s 2019 Drought Contingency Plan and other efforts, its attorney, Jason Hauter, told the state’s Drought Monitoring Technical Committee this month. GRIC plans to provide another 111,000 acre-feet for the cause next year, he said, including both water that it could retrieve later and that it couldn’t but that would require compensation.

An acre-foot is about the amount needed to support roughly three Arizona homes for a year, according to the Department of Water Resources, though much of the river water is applied on farms.

GRIC has rights to nearly 312,000 acre-feet from the Colorado, much of which it leases to others, and the majority is under high-priority rights not at risk from a shortage declaration. Still, nearly 121,000 acre-feet of it is in a pool that is subject to shortage cutbacks, so the community will lose some water with the first shortage next year and would lose more if the reservoir plunges lower and triggers a “Tier 2” shortage at elevation 1,050. At that point, Arizona would surrender 80,000 acre-feet on top of the 512,000 it will give up during the first rung of shortage restrictions.

Like other irrigation districts or communities in that situation, it’s in the community’s interest to maintain lake levels.

The water that Arizona must give up next year due to the shortage declaration represents about 18% of its Colorado River share or about 8% of all the water used in the state. Most affected will be central Arizona farmers relying on low-priority rights from the Central Arizona Project canal. Nonetheless, Buschatzke said, the arrival of actual shortage cutbacks spurred quick action from water systems across the state to store more water and prevent further restrictions.

“They understand the lake’s really at risk,” Buschatzke said. “More parties are at risk of forced reductions. Before, it was pretty much our agricultural folks.”

If the various boards and councils prove him right and the state succeeds in cobbling together enough commitments to sign a deal as planned next month, it will have happened at lightning speed compared to the squabbling that preceded the 2019 Drought Contingency Plan that saved 192,000 acre-feet a year in Lake Mead. That plan took years, not months, when negotiators had the luxury of looking ahead toward shortages instead of facing a current shortage declaration.

“The buffer’s gone,” Buschatzke said. “It’s getting much more serious than it was with DCP.”

There are several pots of money in the new infrastructure spending law that could help with Colorado River conservation or other water savings within the states. Among them are $3.2 billion for western water projects; $400 million in federal cost-share grants for applicants in the Bureau of Reclamation’s WaterSmart program; $450 million toward water recycling and reuse programs; and $100 million for competitive grants for states and tribes with watershed improvement projects.

A spokesperson for Rep. Greg Stanton, D-Arizona, said the lawmaker’s office is working with Reclamation to clarify priorities and is advocating for Arizona projects.

Sen. Mark Kelly, D-Arizona, toured a Chandler park that doubles as a water recycling center last week to show the kind of project that the infrastructure funds could promote. Veteran’s Oasis Park centers on a fishing pond but also an undeveloped zone into which the city sinks treated wastewater for later reuse after further treatment.

“This whole park allows us to replenish our water underneath,” Chandler Mayor Kevin Hartke told the senator. The city recycles all of its water, the mayor said, with some “purple pipe” reclaimed water going to homeowners’ associations or golf courses for landscape irrigation.

“On the International Space Station, we use the water over and over again,” said Kelly, a former astronaut. “This is the scaled-up version and the more natural version. This is the future.”

Funds from the infrastructure package could also support the study of desalination projects like one seawater plant envisioned for Mexico that Kelly said could help keep Arizona from facing worse Colorado River shortages.

Such a plant, built on the Sea of Cortez, is under initial study and being discussed seriously by the same three states now looking to keep water in Lake Mead. It could come online in a decade or so, Buschatzke said, and would pipe water to the border at Yuma, where it would flow to Mexican water users. The states would contribute funding and Mexico would give some of its Colorado River water from Lake Mead to them.

Arizona also is partnering with California and Nevada to start a water recycling plant along Southern California’s coast. Like the desalting idea, this project would provide water directly to the nearest users, in this case, Californians, while compensating the others by keeping river water in Lake Mead. The goal is to recycle 161,000 acre-feet a year, Buschatzke said.

While the timing is uncertain, it’s possible that some portion of that water savings would come online in time to help with the states’ five-year plan to prop up Lake Mead, he said.